According to the Centers for Disease Control (CDC), there are over 23 million diabetics in the U.S., and another 40 million people with pre-diabetes and other blood sugar issues. The CDC projects that 1 in 3 people could have diabetes by the year 2050.

Jeff Cohen has been a diabetic since 1993. He was frustrated while trying to find a snack that didn’t cause a blood sugar spike and also tasted good. He finally decided to create his own, and his company Granola Gourmet was born to solve the problem.

From humble beginnings in his family kitchen, the meal replacement bars were made in small batches using organic ingredients and became a weekly family tradition. His teenage boys began getting requests for new flavors from their friends. The cast and crew of Hollywood television shows from The Ellen Show, The Mentalist, Entourage and others on the Warner Bros. lot and CBS-TV began buying the bars. Soon they became the healthiest product on the Craft Services table catering to the motion picture industry. And Granola Gourmet became a local family-owned business success.
_________________________________________________________________________
"...you'll find our energy bar products priced the same or less than many of the bars that are not healthy...”

Cohen’s company has just introduced what it calls its Ultimate line of individually wrapped energy bars replying to consumer and grocer requests for natural portable snack items. The individually wrapped bars also respond to consumer demand for 100% natural grab-and-go snacks that don’t spike blood sugar. Made entirely in the U.S., the bars come in four flavors.

According to Cohen, as demand for diabetic food items becomes mainstream, many national retail and grocery store chains are expanding their healthy and natural product lines.

“While Granola Gourmet Ultimate Energy Bars are designed to satisfy your sweet tooth, the bars do not have refined sugar or the fat and sodium content of other popular protein and energy bars in its formulation,” explains Cohen.

“As a Type 2 diabetic, I wanted to create a product that is healthy, tasty and filling that could meet the needs of diabetics, as well as athletes and health conscious consumers.”

But is healthy food too expensive?

“Not anymore,” says Cohen. “Organic ingredients have come way down in price. We are seeing small differences in the cost of many of the organic ingredients we acquire today. In our case, you'll find our energy bar products priced the same or less than many of the bars that are not healthy,” Cohen notes.

This is the first time consumers will have the opportunity to purchase Granola Gourmet’s individually wrapped bars or in a caddy of 10. Ultimate Berry with blueberries, Ultimate Fudge Brownie with a nutty texture, Ultimate Mocha Fudge with a chocolaty base and touch of coffee flavor and aroma and Ultimate Cran-Orange make up the Ultimate selection. 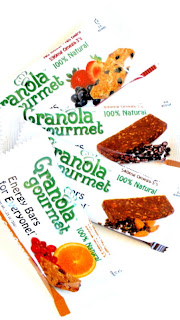 Granola Gourmet bars contains 10-12g whole grains and 530-590mg of omega-3. For those with other dietary requirements, the bars are free of wheat and dairy, low in sodium, and are kosher and vegan.

In Northern California, Safeway and Vons are carrying the products. The nationwide grocery chain launch is supported by a giveaway rebate offer that enables customers to receive free Granola Gourmet Energy Bars in exchange for proof of purchase. For more information about Granola Gourmet visit www.granolagourmet.com.

In a sea of energy bars, customers have found Granola Gourmet products are 100% natural and formulated with several organic ingredients.

“When I think about our brand two words come to mind, healthy and delicious,” says Cohen. “When Whole Foods in Southern California began carrying our product line I knew we had something and decided to put extra effort into the business. Today, we are expanding and excited about the future,” Cohen says, with a big smile.