Buster Posey is NL Rookie of the Year

San Francisco Giants catcher Buster Posey, was named the winner of the National League Rookie of the Year Award on Monday. Posey, 23, the Giants' first-round draft pick in 2008, began the 2010 season with the Triple-A Fresno Grizzlies where hit .349 with six homers in the first 47 games of the season in the Minors before being called to the Giants May 29. 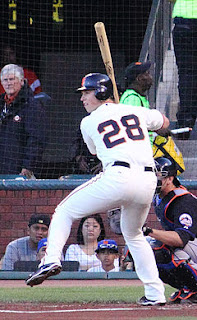 Buster Posey
Visit the November 11 post on NutraInk.com and listen to the interview conducted with Posey on April 6 while he was still a member of the Fresno Grizzlies.