Apolo Ohno Greeted by Hundreds of Fans in Fresno

Apolo Ohno is the co-founder and formulator of 8zone, a dietary supplement company. But he is best known for being the most decorated American Winter Olympic athlete of all time.
Monday in Fresno, he was known for his new book, Zero Regrets: Be Greater Than Yesterday. The face of short track speed skating worldwide was greeted by hundreds of fans waiting to catch a glimpse of their favorite U.S. Olympian and have their book autographed. 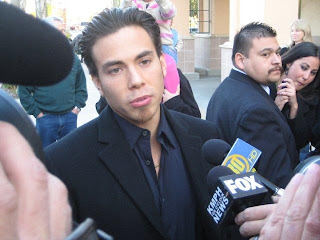 Ohno talking to Fresno media while on tour to promote his new book.
Ohno was on the 16th stop of his book signing bus tour that when it ends on December 4, will have covered 34 cities in nine days.
“I’ve been living on that bus,” Ohno told Fresno media.  A bus that is adorned with Ohno’s book cover and picture of him doing what he likes to – skate. Ohno's touring book bus in Fresno.
Ohno redefined the sport of short track speed skating starting in 1999, when he became the youngest athlete ever to win a World Cup event title. He won the overall World Championship in 2008, the World Cup Overall title in 2001, 2003, and 2005, and the men’s national title 12 times.
He has won eight Olympic medals and 23 World Championship medals. In October 2003 and March 2008 he was the United States Olympic Committee’s Male Athlete of the Month.
In 2007, he was also the winner of the fourth season of the popular ABC-TV television show, Dancing with the Stars.


In Zero Regrets, Ohno shares his moving personal story behind his great success, as well as the hard-won truths and strategies he has discovered in good times and bad.
The book is much more than an account of racing competition. Zero Regrets is a captivating story of a father-and-son relationship that expanded over time and based on respect, love and unwavering faith in each other.