Swede Johnson Basks in the Glory of 1950s Baseball

According to published online reports, nearly 100 fans from Sanger were among the crowd. Several Sanger baseball team members were in attendance, including Johnson.

As I have read, the 1950 Sanger baseball team, a school of 600 and with a roster of only 15 players, won the 1950 Central Valley championship. The Apaches rallied to win the County championship against Roosevelt 11-9, then came back from an early 5-run deficit early to beat Visalia High 9-8 for the Valley title on Swede’s winning RBI single in the bottom of the ninth before a crowd of 1,200 on their home field. That’s a lot of people for a high school baseball game then and now.

I recently had the chance to chat with Swede at a recent Christmas function where he and I talked about the team's big night, his high school days and sports in general in today’s world. 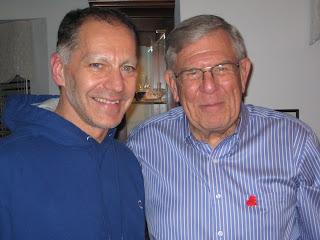 "Of course Green's contract was a lot different than it is today for professional athletes," said Johnson as he watched the Christmas Day Los Angeles Lakers and Miami Heat game on ABC-TV that featured all those highly paid players. Incidentally, the game also marked the introduction of a new line of basketball shoes by Lakers' start Kobe Bryant. The Laker players and many fan notables in attendance were wearing them. You can't beat co-branding on national television.

NutraInk.com learned that during the dinner, commemorative medallions were awarded to each player and survivor’s representative. The team received praise from California and U.S. legislators in the form of a framed proclamation from the U.S. House of Representatives signed by Congressman Devin Nunes, and a California Assembly Resolution commending the accomplishments of the team, signed by Assemblymen Michael Villines and Dave Cogdill.